Navigate back to the homepage

Ayurveda is the most ancient therapy all across the world. It is about 5000 years old, first time mentioned in the Rig Veda. It literally means science of life. The word Ayurveda is the combination of two words Ayu and Veda.

As per Rig Veda, following are 2 basic principles of our constitution:- 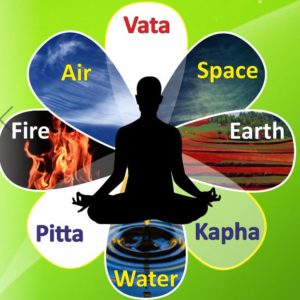 According to Ayurveda, every human being is structurally composed of Five basic elements of Universe. They are Earth or Prithvi, Water or Jal, Fire or Agni, Air or Vayu, Ether or Akash. These five elements contain five characteristics. They account for the five faculties of Shabda (sound), Sparsha(touch), Roopa(sight) ,Rasa(taste), Gandh (Smell) . Thus every individual has these distinct five faculties as each of these faculties has emanated from one particular element. but the functional aspect of the body is governed by three biological humors.

Akash or Ether is accounts for the hearing or ear and is represented by sound. Air , It represents the gaseous state of matter and is responsible for the respiratory system. Fire, It is responsible for digestion and perception. Water , It is responsible for fluid metabolism in the body Earth, This is the basest element earth can be perceived by all five senses sight, hearing, smell, taste and touch 3 humors or 3 organizations of the body- Tridoshas :- Vata —a combination of ether and air Pitta—a combination of fire and water, Kapha—a combination of water and earth. Each individual has unique characteristic of VPK which is decided at time of its birth. In Ayurveda line of treatment, Doctors Cure the patients by bringing back the balance in Tridoshas.

In Ayurveda Shaman and Shodhan are the two basic steps for the treatment and balance the doshas.

Ayurveda is also known as one of prominent Preventive Healthcare System which helps people to remain healthy without falling sick.

To know more about Vata Pita, Kapha, Trodoshas of your body , Pls book the appointment with Dr Shallu Garg

Benefits of Sweet Lassi or Buttermilk in the Summer

Lassi is full of friendly bacteria that lubricates the intestine, probiotic healthy drink much better than any other beverage. Salted lassi is easy to digest.

Diagnosis in Ayurveda is different than Allopathy